I Swear, I Did It For Acoustic Reasons

When I finished renovating my studio in 2014 (see here), I knew there was still one element that needed addressing: my computer monitor.  Sure, it was a decently sized 30”, but at ten years old the resolution wasn’t the best, and additionally it felt obtrusive in the room…like when someone sticks their genitals in your face while you’re trying to make an origami.


Although the computer screen was positioned far enough back to avoid blocking the direct sound path from the speakers, it still hovered over the apex of the desk, so if you leaned too far forward it caused a “window” type of effect on the frequency spectrum, making it sound goofy.  And I wondered if a 30” surface hovering in mid air might be creating some unwanted acoustic reflections.

Of course, if you remove the computer screen, you have to replace it with something else.  And what better thing to replace it with than a giant flat screen TV flush against the wall?  This would give you everything: no reflective surface hovering above the desk, no “windowing” when leaning forward, and aesthetic awesomeness.

But not just any TV would do - it would need to be big enough and sharp enough to allow comfortable viewing, and most importantly comfortable reading, at a distance of 7-8 feet.  Upon testing in the field (i.e. hooking up a laptop to various TVs in-store) I confirmed the only suitable candidate was a 4k TV at 58”.  This would yield super crisp text from the computer at the required distance, and would optimally maximize the space in between the speakers.

So earlier this year I put my plan into action, and the result speaks for itself: 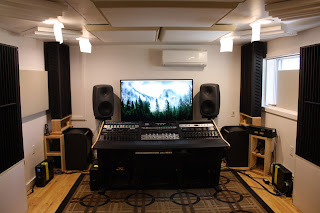 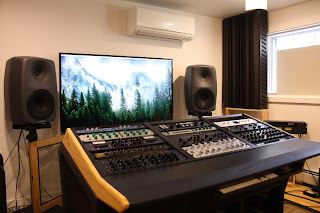