At various points in my career, I've had the privilege of working in some pretty appalling acoustic environments - untreated rooms, un-sound-proofed rooms, even an untreated and un-sound-proofed studio with 8 windows, across the street from a major highway (yikes!).  Although such conditions unquestionably pose severe obstacles in the way of music production and mixing, I believe that where there is a will there is a way, and that the creative spirit can miraculously overcome such handicaps (provided the music ends up in the hands of a good mastering engineer).  That being said, working within an "accurate" acoustic environment immeasurably increases the effectiveness of one's mixing, and allows for a more informed decision process during production, since one can hear things that are actually present in the music, without being influenced by acoustic anomalies and illusions created from the way in which sound waves bounce throughout the room.  So every audio professional naturally seeks to take the room out of the acoustic equation.

Thus, when I built a new studio back in 2011, I was determined to make it as accurate of a listening environment as I possibly could.  My philosophy has always been to go big or go home - and seeing as my studio was located within my house, I was already home, which meant I had no choice but to go big.

Built from the ground up with my own two hands (along with those of a master carpenter, who actually knew what he was doing), my new room wasn't fancy in its dimensional layout, but it had an isolated ground and dedicated circuit breakers, so I was off to a good start - that is, until the first listening test made it clear that things were afoul, acoustically speaking.  So I installed some acoustic room treatment.  Then I installed more room treatment.  Then a bit more.  And then a little more.  I upgraded speakers, added a subwoofer, upgraded converters, lowered the noise floor, and replaced one kind of acoustic treatment with another kind.  The results were great, but my expectations were those of a mastering engineer's standard, which meant there could be no compromise.  So I bought a little more treatment.  I experimented with speaker placement, listening position, treatment layout, etc.  I took sound frequency measurements, calibrated speakers, compared results, and acted the part of a trained acoustician.  I measured physical distances with a tape measure and nodded contemplatively.  Then I expanded my studio with the addition of various mastering equipment and outboard gear…and then I bought more treatment.  I moved this there, and that there, and ultimately created a database of over a hundred different layout orientations with their corresponding frequency measurements for each speaker - then I had the lab tech (me) analyze the results.

After extensive research and analysis, and countless listening tests, when it was all said and done I thought to myself, "damn, that sounds good".  Have a look at the pictures below - this may be the very definition of sexy (okay, granted it's not a multi-million dollar facility crafted from melted down platinum and gold records, but hey, sometimes it's the unassuming girl that turns out to be the hottest).

Now, it should be noted that too much acoustic absorption in a room can become less than ideal, depending on the size of the room and the type of absorption.  In this case, more than half of the treatment in this room is low frequency focused, which is to say, does not affect the high end (generally speaking, one can never really have too much low end absorption).  As such, this studio has a tight sound, but not a dead sound.  And with so many mysterious looking pillars, there's potential for some enthralling LSD experiences (acoustically accurate LSD experiences, of course).

It should also be noted that the term "accurate" is a bit misleading within the context of acoustics.  Theoretically, an accurate frequency response would be that of a flatline, with no frequency bumps or dips along the spectrum.  But as it turns out, actually getting a flatline is rather impossible; and what's more, you probably wouldn't even want it if you could have it, which brings up the non-technical side of accuracy…namely, that there is a degree of subjectivity to tuning a room, and that every room invariably has its own "sound" or "vibe".  So while one should chase the flatline in principle, all technical findings and decisions must be weighed against subjective perception and taste (making for an interesting catch-22).

Lastly, I'd like to draw attention to the thin piece of tissue hanging from the ceiling above the computer monitor.  This tissue paper is the single most important aspect of the entire room, the very corner stone of the studio in fact.  It does not serve an acoustic function, but rather, prevents the light source from blinding the person in the central listening position…because if there's one thing I learned in all my efforts to realize the perfect listening environment, it's this: when there's too much light shining in your eyes, you can't hear anything accurately. 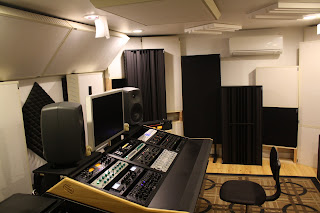 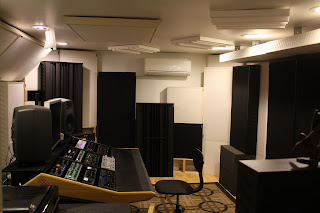 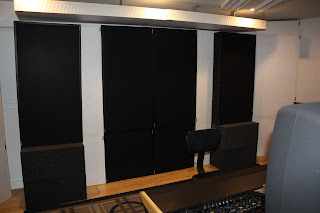 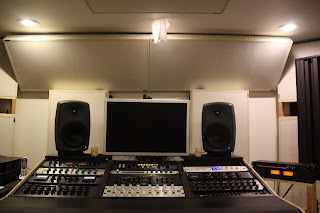 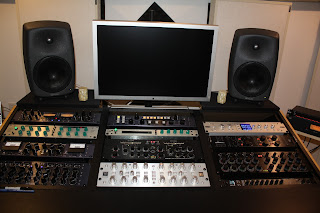